Destroy All Humans! Wiki
Register
Don't have an account?
Sign In
Advertisement
in: Enemies, Organizations, Path of the Furon,
and 4 more

The White Dragon Kung Fu Society is a triad in Shen Long that opposes The Master. It is led by Saxon.

Long ago, The Master had a student named Saxon, but he was corrupted by power. He left the Master and formed the White Dragons to oppose him.

Since the Master recruited Crypto to his cause, they have been at war with each other. Crypto succeeded in destroying their business interests, smuggling operations. When the Master faked his death, Crypto destroyed their base, their leader Saxon, and the whole empire with a terrible vengeance.

The White Dragon soldiers use staves that shoot energy beams and they have martial artists in their employ. They also use tanks, helicopters, and heavily armed vehicles. Their leader, Saxon uses a Nexo dragon made from Nexo technology smuggled from Francodyne Industries. 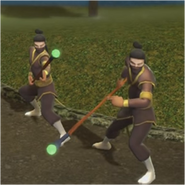