Destroy All Humans! Wiki
Register
Don't have an account?
Sign In
Advertisement
in: Organizations, Humans, Common Enemies,
and 8 more

The Roller Girls are a gang in Fairfield in Destroy All Humans! Big Willy Unleashed, comprised of college-age girls wearing roller skates, most of them also used face paint to paint colorful geometric shapes on their faces, and they were armed with antique Furon D-rays and dynamite when attacking Big Willy's. They are led by Mindy Peters.

When the 500th Big Willy's restaurant opened, the Roller girls attacked the restaurant, and made off with the suitcase containing the secret recipe, Pox ordered Crypto to retrieve it, but when he did so, the case turned out to be a decoy containing a bomb, that disabled Crypto's weaponry and equipment, at which point he was forced to return to the Saucer, were he found four gang members guarding it.

Pox was not happy about the attack, so he sent Crypto to find and destroy the gang's hideout, and after this, Mindy Peters decided to annihilate Big Willy's, ordering her gang to plant dynamite on the restaurant, but after this failed, Pox decided it was time to eliminate Peters, and told Crypto to find and bodysnatch the Corncob King, and then meet Mindy in the park, and once they met in the park, Crypto jumped out of the Corncob King, and killed them both, using his Zap-O-Matic.

Pox then decided it was time to eliminate the town, ordering Crypto to destroy every last building, destroying the majority of the gang, however several members remained, and continued to attack Crypto whenever he visited Fairfield. 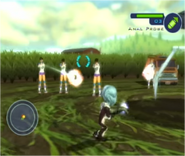 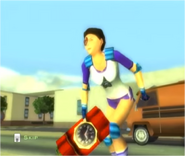