President Huffman is the President of the United States who appears as a minor character in Destroy All Humans!.

During 1959 (the first game's setting), Huffman has won the presidential election against Richard Nixon (historically, John F. Kennedy won the election in 1960). Some of the Americans in the game see him as sleazy and crooked, and those who do like him (primarily women) admire his looks. The Military, particularly Armquist, dislike him, believing him to be a puppet for Silhouette and Majestic.

After Armquist's death in Union Town at the hands of Crypto, Huffman makes a public speech in front of the Capitol Building, where he is assassinated by Crypto, who managed to wipe out a Majestic unit disguised as a presidential convoy. If Crypto fails to assassinate him within the time limit, the papers will call President Huffman "loco" because of his "confused speech". However, his death was covered up by the newspapers claiming he was ill, and his brain was later extracted by Silhouette and used to build the Roboprez, a giant robot mech controlled by Silhouette. The Roboprez was destroyed by Crypto's Saucer.

Crypto later uses Huffman's disguise to masquerade as the President and take over the US government, operating a new non-lethal Furon DNA extraction method through Testing Machines. However, Crypto soon lost interest in controlling the government, which led Orthopox into creating a "mechanism" of Huffman to keep the government in control. Although never seen, Pox tells Crypto that his job approval rating has tripled since he made the switch. Crypto is also mentioned as being known as the President by other characters in the game, much to his surprise.

By the time of Big Willy Unleashed, Crypto as Huffman officially resigns from the position of President.

President "Huffman" is revealed to be Crypto in holobob.

Huffman in the paper after The Lone Gunman

Huffman in the end game newspaper. 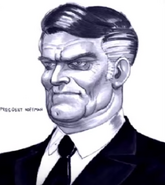 Concept art of Huffman.
Add a photo to this gallery

Retrieved from "https://destroy-all-humans.fandom.com/wiki/President_Huffman?oldid=14118"
Community content is available under CC-BY-SA unless otherwise noted.