Destroy All Humans! Wiki
Register
Don't have an account?
Sign In
Advertisement
in: Enemies, Humans, Leaders,
and 8 more

Patty Wurst is a rich girl who works for Colonel Kluckin, not knowing that his food is also people. Despite being rich, she is a leftist.

Patty Wurst is a billionaire heiress with access to great wealth. She has militant activists at her disposal who are armed with guns and ride in yellow minivans.

In her fight with Crypto inside Big Willy, she uses a large tank that she uses to attack the Big Willy restaurant. It is heavily armored. Its weapons include a shell launcher and cruise missiles. Also, despite its size, it can travel very fast on the road.

Patty Wurst was recruited by Colonel Kluckin to attack the Big Willy franchise, and was in charge of getting the word out to everyone that the restaurant uses ground human meat in their food. But due to her tendency to speak in metaphors, the stupid humans don't seem to be getting the general idea, but flock to her anyway merely as a diversion for their pathetic lives.

When Crypto and Pox find out about that they try to eliminate her. They find out who she works for and that one of the reasons she is doing all of this is to get back at daddy. She tries to attack the Big Willy restaurant in Harbor City, but she is stopped and killed by Crypto in the Big Willy mech. 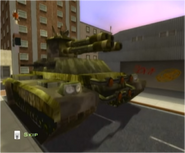 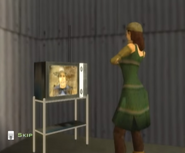