The Gastro gun is a weapon used by Crypto in Destroy All Humans! 2.

The weapon fires a Holo-pod unit which has a hologram of Gastro, the Mothership's janitor, who downloaded his consciousness in a holographic unit when the Mothership was destroyed, just like Orthopox. His unit automatically shoots plasma bolts at Crypto's enemies and also project energy bombs for more damage. 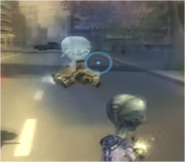 Gastro and Crypto slaughter some Blisk.
Add a photo to this gallery

Retrieved from "https://destroy-all-humans.fandom.com/wiki/Gastro?oldid=11044"
Community content is available under CC-BY-SA unless otherwise noted.