Destroy All Humans! Wiki
Register
Don't have an account?
Sign In
Advertisement
in: Races, Enemies, Blisk,
and 7 more

The Blisk, also called Martians, are an extraterrestrial race hailing from the planet Mars and are the most dangerous enemy of the Furon race.

The Blisk are large, crustacean lifeforms. They are bipedal, and their small heads are located in the top-center area of their bodies. These beings have a tough, dark-colored armor which makes them impervious to radiation and most Furon armaments. Their arms end in claws which are able to fire a green beam, though whether this is part of their standard anatomy or a weapon implant remains unknown.

The Blisk posses a hive mind, though each Blisk appears to be able to some degree of independent thought. The Blisk resist many Furon psychic attacks such as Psychokinesis and mental manipulation. Curiously, the Blisk appear to be able to infiltrate human society by taking a human form through unknown means.

There is also a small group of albino Blisk who are mistaken for Yetis, a legendary creature from the Himalaya Mountains. They are bigger and much stronger than other Blisk, making them even more of a threat. However, they are usually found in Tunguska and far away from most Blisk.

Not much is known about Blisk society aside from the fact they operate in a hive-like structure. When speaking, drones use the terms "we" or "us" but have occasionally slipped in times of danger when they refer to themeselves as individuals. The leader of a Blisk hive appears to be exempt from this quirk, referring to himself only. It has been mentioned that the Blisk language is quite similar to what the humans refer to as the Russian language.

The Blisk, despite appearing to be simple brutes, have mastered radioactive and chemical warfare, along with genetic engineering. Their technology is mostly both organic and mechanical. Most of their technorganic advancements are powered by radiation.

Their hardware is made of a substance similar to the Blisk's own armor, defense shields are used for added protection to their own shells, and their weapons release radioactive beams of energy. They also have mines, poisonous radioactive gas, and turrets that shoot energized beams (similar to the tesla coils). They have warships whose hulls are impervious to human and Furon weapons.

Ironically, one of the methods for destroying Blisk weapons is to overload it with radiation. One huge development is the creation of Blisk Spores which can turn a normal human into a Blisk Mutant bent on destruction.

The Blisk didn't appear to have had imperial ambitions at the time the Furons came to Mars. When the Martian War finally started, the Blisk were able to cripple Furon forces, so the war escalated to the point the Furons developed stronger radioactive weapons. The Blisk were nearly wiped out, and Mars was turned into a dead world, devoid of water. The only surviving Blisk were aboard a warship which crashed in Tunguska in 1908. The Blisk proceded to take over the Russian Revolution and take the reins of the newly-formed USSR.

At one point, the Blisk realized the humans were the key to the survival of the Furons who now faced extinction. A plan was developed to cooperate with the Soviet Union in order to reach the Moon, set up a base, and bombard the Earth with spores and radiation, wiping out all of humanity, the Furon's last hope for DNA. The Blisk were rediscovered by Cryptosporidium 138 in 1969 while Milenkov was leader, and a campaign was started to destroy the Blisk Warship on Tunguska, and later stop the bombardment of Earth. The Blisk bases on Solaris were destroyed and Milenkov was killed by Cryptosporidium.

Following this revelation, the remaining Blisks rose up in order to send an emergency message to any alien ships passing by, requesting rescue. Their message was disabled and replaced with a Furon transmission. The remaining Blisks were then hunted down and destroyed. 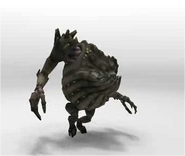 The Blisk arrive to attack the Cosmonauts on Moon Base Solaris.